Huntington Beach, CA – A record crowd assembled on July 4th to watch in awe as Tim Conway, Jr.’s “Waves of Freedom” float was one of the stars of the 110th annual Huntington Beach parade. 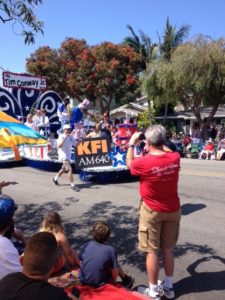 Attendees to the parade and people all over Southern California were “tracking” Tim’s progress on the parade route via GPSTrackIt.com/’s official Tim Conway, Jr.  tracking page at www.GPSTrackIt.com/tim.

The Los Angeles based KFI AM 640 Tim Conway, Jr. float was equipped with a GPSTrackIt.com/ GPS vehicle tracking system that monitored it’s every move along the historic Huntington Beach parade route.

Fans were able to keep track of Tim and his float from their smartphones and tablets as it paraded through Main Street so as the float approached they could be prepared and ready to cheer Tim all along the parade route.

It was a great experience to track exactly where the float was and finally meet at it’s destination!, says Crystal B., Parade Attendee

Tim is also having GPSTrackIt.com/ equip his RV with their award winning GPS tracking solution for fans to follow his upcoming Southern California vacation journey at the end of July 2014.

Tim’s show on KFI is known for providing Southern California with a wide variety of entertaining topics, including LIVE police chases, Hollywood craziness and current events with a twist of humor. Conway’s down-to-earth take on life brings a sense of refreshing levity to Southern California.

Established in 1999, located in Southern California, GPSTrackit is dedicated to providing its clients the most innovative, cutting-edge GPS tracking technology for business vehicles and assets accompanied by their world class customer service.