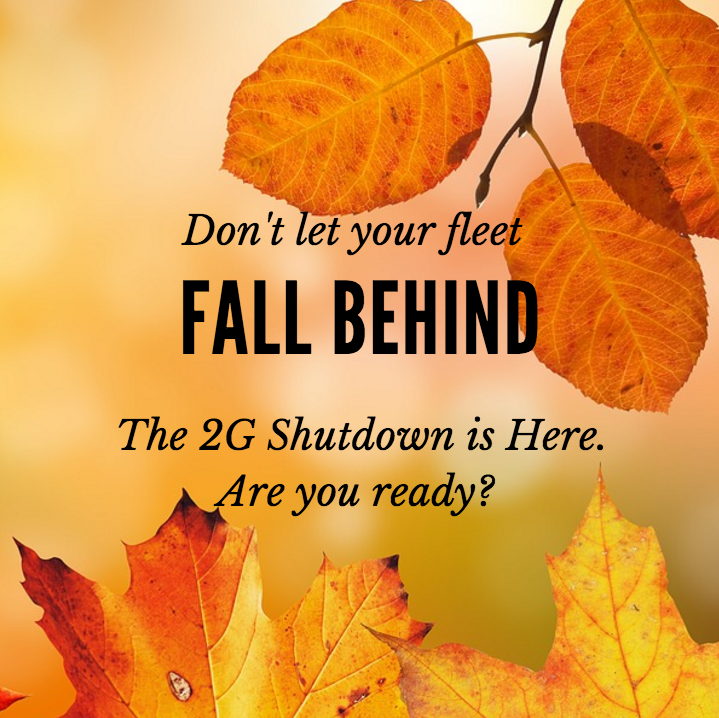 The fleet world is abuzz with AT&T’s decision to completely shut down its 2G network by the end of 2016.  However, according to some recent reports, the process of phasing the 2G network out is already underway. This means your fleet management system could face some major roadblocks in the near future. As a fleet manager, how can you prepare for this transition?

Fleet management solutions fall under the category of M2M (machine-to-machine) solutions. M2M devices, including fleet telematics, are usually hosted on 2G networks, as they have low data requirements. Now, as you may know, AT&T is completely doing away with 2G networks by January 1, 2017, which means M2M solutions that rely on AT&T’s 2G network might face service disruption.

Why is AT&T Making this Switch?

There are mainly two reasons as to why AT&T is shutting down its 2G network. With the proliferation of smartphones, tablets, etc., the demand for high-speed mobile data has skyrocketed. Over the years, data traffic has grown at an exponential rate and will likely continue to do so for the foreseeable future. Due to this, carriers are shutting down the slow 2G networks and subsequently repurposing the 2G infrastructure to accommodate high-speed 3G/4G networks. Secondly, 2G devices are now widely considered things of the past. Thus, for companies like AT&T, expanding the 3G/4G networks makes sense.

What if your fleet’s Telematics solution doesn’t involve AT&T’s network at all? Should you even be worried about the 2G Sunset? According to a survey conducted in 2013, nearly 51% (around 14.7 M) out of 29.2M M2M applications are hosted on AT&T’s extensive network. Additionally, other carriers like Verizon, T-Mobile, and Sprint tap into AT&T’s network resources to fill in their service gaps. So, even if your fleet management solution isn’t hosted by AT&T’s 2G network, your fleet may still be at risk. It is likely that customers across all major networks will be affected sooner or later due to the AT&T 2G Sunset migration.

As a fleet manager, you depend on data and network access to schedule, reroute, monitor, and manage your fleet. Knowing the facts can help you prepare for the 2G Sunset and carefully monitor the activities of your fleet management provider.

These are some of the common questions that fleets have been asking in regards to the AT&T Sunset:

The replacement devices may be more expensive, when compared to your old 2G devices. Before you start to work this into your budget, however, ask your telematics provider about their approach to the shutdown. Your fleet management vendor might upgrade your 2G devices at little to no extra charge.

Q: Making the transition is going to be a headache for me, what’s the best way to go about it?

Forward-thinking fleet management vendors will work closely with you to ensure the migration is as seamless as possible. Besides, the duty of your provider is to install upgrades and make the system ready-to-use for you. Before you do anything else, contact your provider to see if they have a plan in mind.

Q: I have an off-road fleet and 3G/4G coverage is not great in rural areas. Why should I make the switch?

A few years back, this was a legitimate concern. However, with extensive deployment of 3G/4G/LTE clusters and specialized equipment, the connectivity in rural areas is almost always as good as it is in cities.

If your fleet’s telematics devices rely on the 2G network, you need to start planning for the 2G Sunset now. Since the 2G phase-out has already begun, you must contact your vendor and inquire about their contingency plan. If you feel your fleet management vendor isn’t working to make things easier for you, consider looking for a new telematics provider. Following up with your provider and working closely with them will ensure that your fleet survives the migration with minimal disruption.